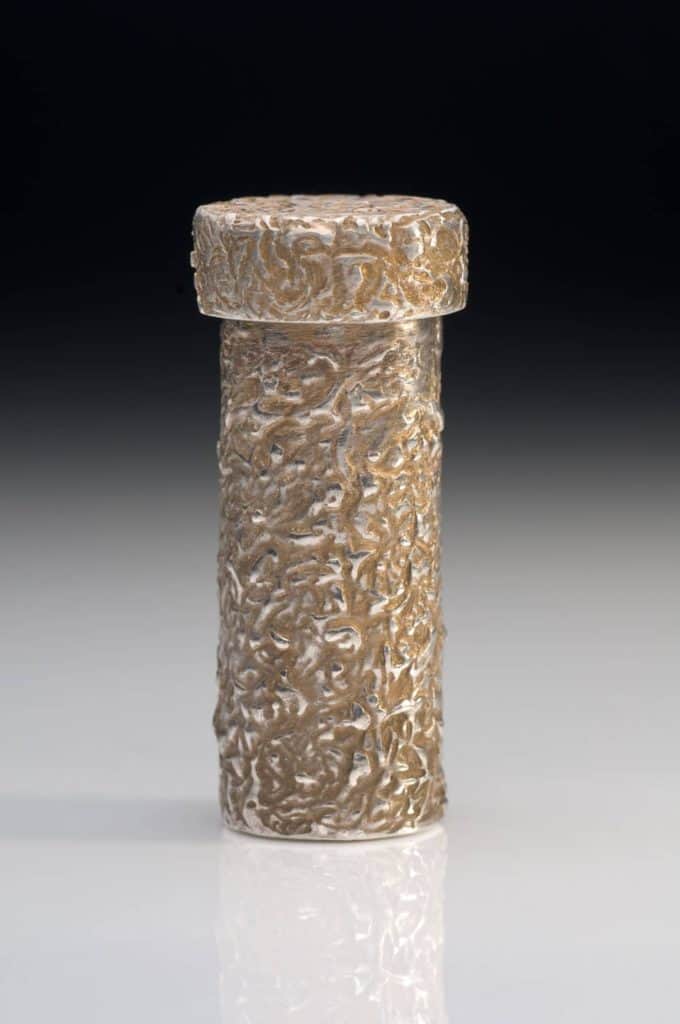 This is one of the only projects I’ve made in one go. It took some thought and also exploration of threaded objects to get an idea on how to do it. It’s funny, we open and close things all day but never really think about how the threads work. I was advised to look at the different types of threads on everyday objects and that was good advice.

The body of the box was made as a tube and I used the handle of a pin tool to get the shape. I added the base once the sides were dry and then when this was all dry I made threads on the box part.

I decided to do a simple screw closure with just one turn in the thread rather than something that went round and round. I figured this would give less room for problems! I marked the start point of the thread and about half a centrimetre below this, the point for the end. I then marked a point half way between these two points on the opposite side of the box top. I then drew a pencil line round joining the dots so I had a line to follow for my thread. I used a Makins extruder to give me a consistent ‘worm’ of metal clay for the thread and stuck this to the box. So far so good!

Once that was dry, I wrapped some Teflon paper around the screw and made the outside of the lid around this. Once it was dry I then marked a line around the inside of the lid for the thread, making sure it ran in the opposite direction to the thread on the box so they would fit together. I had to do some precise measuring to get the lid thread in the gaps of the box thread. I then made the thread in the same way as before, stuck it round the inside of the lid and waited for it to dry. That was the moment of truth – did the screw work? With a bit of filing it did work, this bit is very delicate though so there’s a bit of a leap of faith with it. I put the top on the lid, textured the whole thing and then fired it, lid off. When it came out of the kiln I had a little bit more work to do, some sanding and wiggling, to get the lid to fit but it worked fine. The piece did reasonably well in the scoring.

I was happy with 8 out of 10. The piece got 2 out of 3.5 for design and I think this was because it was pretty simple. The notes from the assessors said, “There is room for embellishment such as a tiny stone or bit of detail to contrast with the otherwise encompassing texture.” The box was pretty simple with one of my favourite textures, the thick slip and cocktail stick random pattern.

Other comments from the assessors, “A satisfactory object – pleasant to handle and use. The threads are functional and the container has an appealing scale.”

​I was pretty pleased with that!

​Here is the description of the project from the Masters Registry website:-

Make a wearable or functional object that uses a threaded closure. While this could be as simple as embedding a screw, successful work will go further, for instance by building threads to screw a cap on a container.