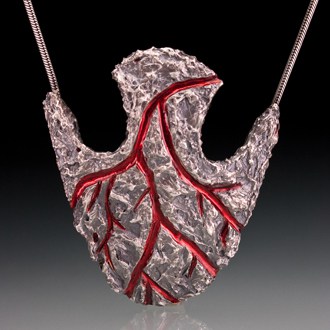 I was keen to do something that had a definite shape but a very free-form texture. The effect I was trying to create with this was lava flow over rough rocks. I created smooth carved dips in the textured surface and after firing, added bright red glass paints. I really liked it but when I showed my Mum, she was not so sure. She said it looked like blood! And the evaluators agreed.

Five out of 10 is not enough to pass. Here are there comments…

“I feel like I’m seeing bad habits here.” Good start! “The archetypal arrowhead or spear point form is a huge odds with the texture (because the texture is uniform across the piece). The arterial lines and color hint at biology or bounds or, what? Life? Death? A poor viewer needs some help here!” Now this comment sums up the limitations of the Registry at the time this piece was submitted. We couldn’t send anything with the pieces to give a view of the story or our intentions so it was left up to the evaluators to decide what the piece was saying.

“The clasp is sloppy and again it is insecure.” Oops, not good! But this is the kicker – “Barbara Simon makes this design very well; you might look at examples.” Ouch!

So I tried again…​ 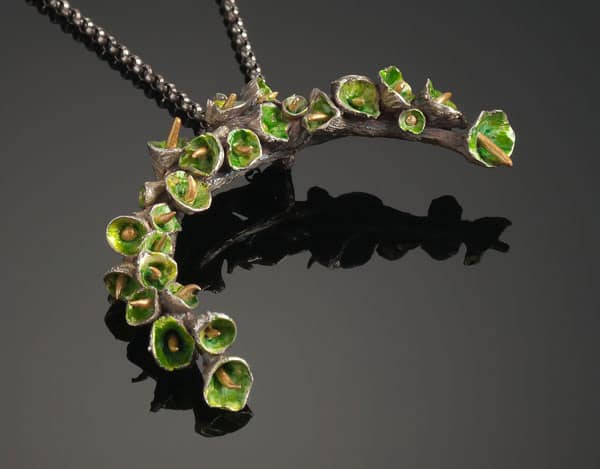 Re-submitted to the Registry evaluators - December 2012

I really loved this piece and it was great fun to make. The twig elements on which the pod forms sit were made first and textured, and then the pods were added. After firing I used ceramic paint and alcohol ink to add the colour. This piece has won two awards and been included in an online juried exhibition. However, the evaluators didn’t like it.

​Here’s what they said…

​”The piece is heavy. The commercially made chain doesn’t fit with the piece., The attempt at textural detail shows better on the back, but is lost with the paint on the front. Too many little elements all thrown together. This creates a lack of a focal point in the design. My eye is all over the place trying to find a place to rest.”

“The three elements attached to the oval on the clasp look like just that —attached rather than integrated.”

The stamens could get caught on clothing or hair.”

“The twisting of the branches is lost with all the “little things” going on. It would have been more effective to have 3-5 larger “flower” elements with the twig stems intertwining. (Odd numbers are frequently more visually interesting than even unless you’re going for a symmetrical look.) The
larger elements would have created a focal point, especially if they were, for instance, of graduating sizes. It also would have given you a larger palette on which to apply the color.”

“More emphasis should have been placed on color in your scoring given that this is a project to “illustrate skills in color.” More than being “about color” this piece uses color decoratively, with a limited palette. I would have hoped points ascribed would reflect the importance of color by being at least 50%.”

I found the toggle clasp to be more successful than the focal piece, which is heavy, physically and esthetically.”

The little blossoms are nicely nuanced but would benefit from some pruning; fewer of them and they would be more appreciated. The way it hangs and the weight of it create an awkwardness.”

“The finish varies too much between the focal piece, the chain, and the toggle.”

“I don’t know what purpose the little extension chain serves. Jump rings this small should be soldered.”

So lots of feedback, nothing positive though! Start again! 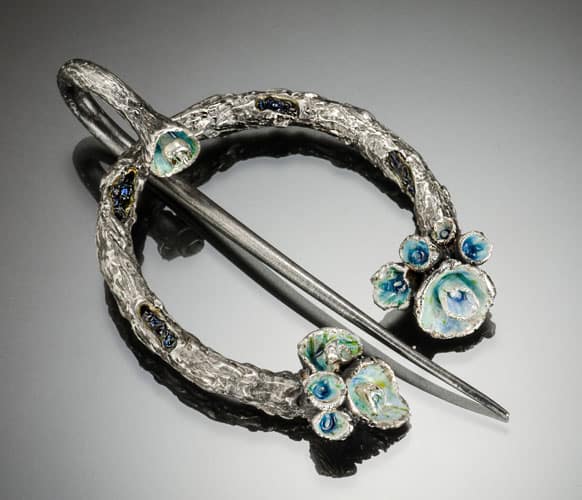 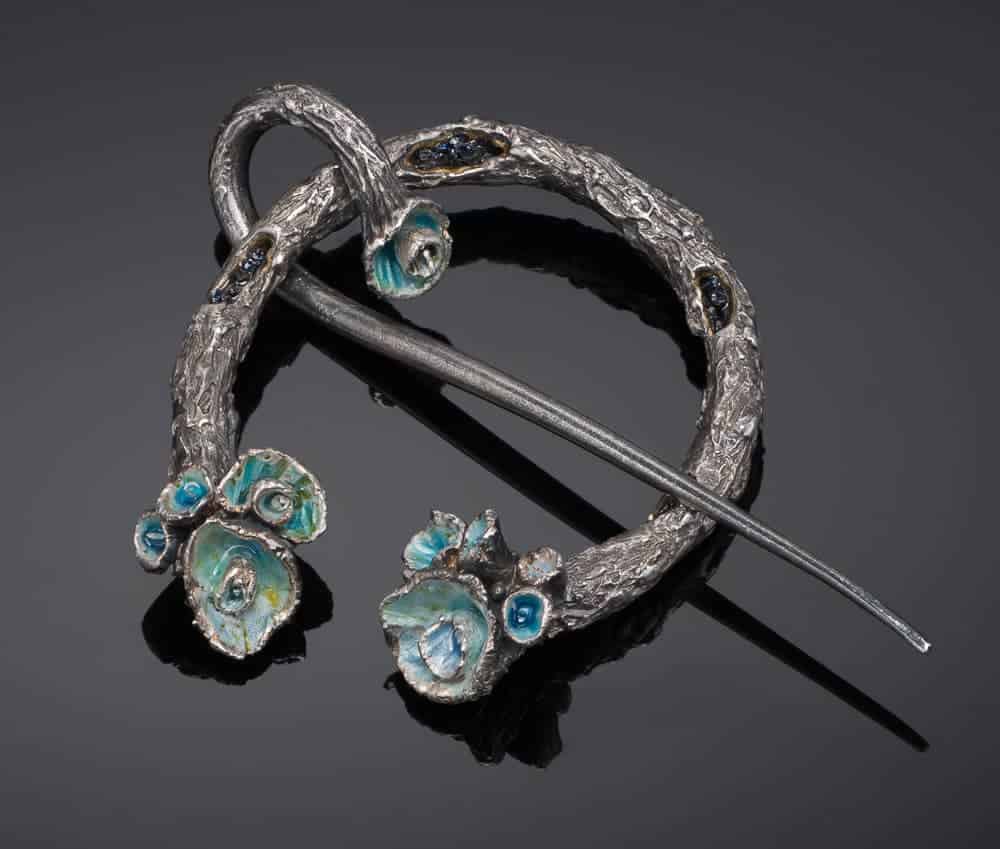 Re-submitted to the Registry evaluators - September 2017

My third and thankfully final submission was a penannular style brooch. I’ve been fascinated by these for a long time and spent time at the British Museum looking at the wonderful examples they have there. I’ve made several of these in different designs but always with an organic feel.

I submitted two brooches to the evaluators but they asked me to choose one and I chose the blue one. Here are the scores:-

“Wonderful interpretation of a penannular brooch. Good use of color blue, it really stands out. This design is a creative approach to a more traditional form factor. The pin, although functional, should be sturdier or thicker because it bends when the brooch is put on.”

​”Well executed design. The point of the pin should be more pointy so it pokes more easily through the fabric, if worn that way. If it will only be used to “wrap around” the fabric, then you’re good to go.”

​”The color is minimal but very effective. This is a complete design and well thought out.”

The feedback is really useful and makes it clear why I dropped 0.2 points. I’m so pleased that this brooch passed with such a good score, I really love it.

Create an original project that shows creative use of color media combined
with metal clay. Provide your own score categories.

Click here to go to the next Level 5 Project