A6 Box with Friction Lid 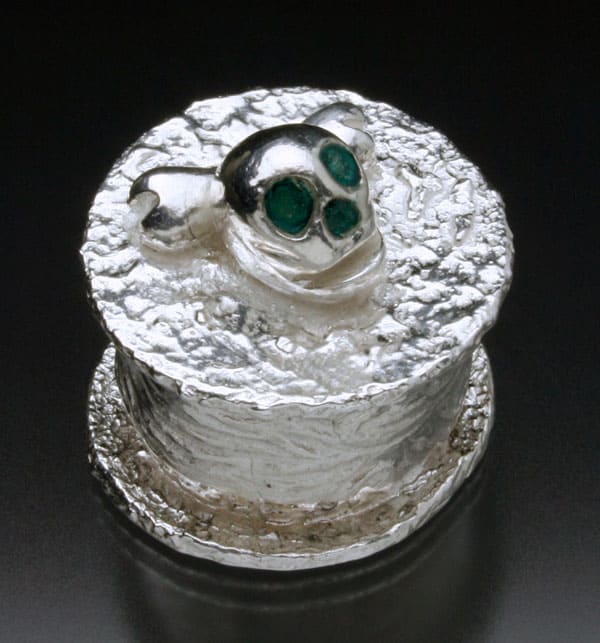 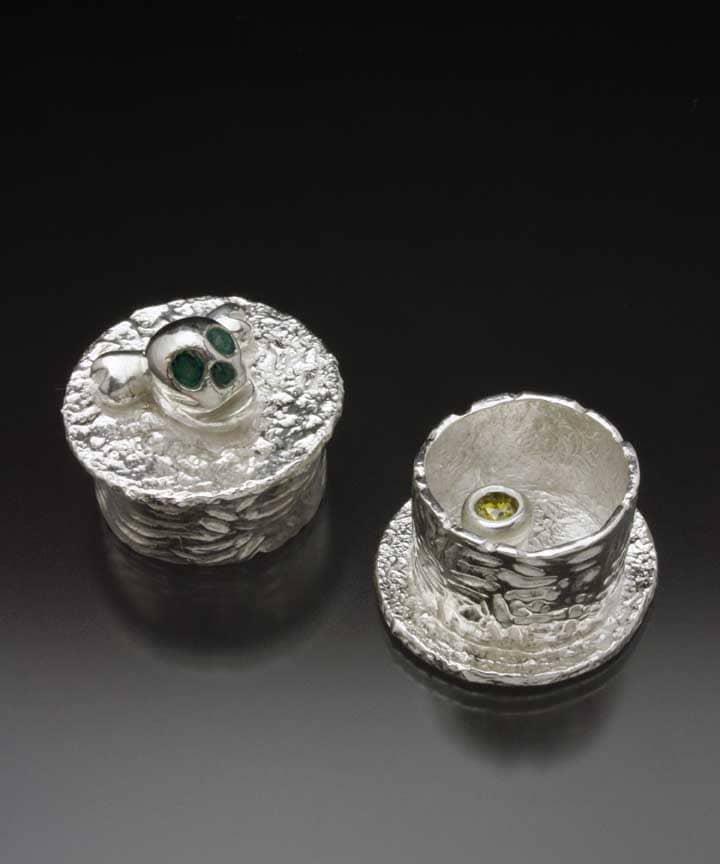 I love making boxes so I was looking forward to this project. But it didn’t turn out to be quite so easy as I thought. It took me two go’s to get a box that worked for the assessors.

My first attempt was a little box that I really liked. It was inspired by a plastic skeleton I had on my work table. I’d been thinking about it for a while and I was sure it would inspire a piece sooner or later. I decided to make a skull head one day when I was just messing around in the workshop. The head turned out so well that I made some bones and then the box grew from there. I made the bottom first and used the plastic skeletons ribcage to make a pattern in the surface. The top of the base has notches cut into it to make it a bit less perfect. I then put a little tube platform inside and set a peridot stone in it. My idea was to have a box that looked threatening on the outside – with the skull and bones – but hid a gem inside.

​Once the base was dry I built the lid over this so the top piece would slide over the bottom and make the friction fit. Again I used the skeleton ribcage for decoration on the sides and made a random slip pattern on the top around the skull and bones. Once fired, I filled the eyes and nose with green resin. It took some gentle hammering around the box lid to get it to fit with a bit of friction. I really loved the little box, it’s 2.5 cms high from the base to the top of the skull and 2.5 cms wide at the widest part of the lid. The assessors were less enthusiastic.

Just 6.5 out of 10 so not enough. The comments explain, “Design: Skull and bone means danger, poison, pirates or some secret Ivy League school society. Upon opening the “box” nothing is revealed. This make me wonder why the skull?” This makes me wonder, why do they ask these rhetorical questions? It’s not like I’ve got the opportunity to answer them. It goes on,​

“The other reviewer says it a little differently: The skull and bone with resin eyes does not relate to the stem with faceted peridot inside the box. I would have liked to have seen more connection or relationship between them. For all of that, there is more I like than don’t like about this little box!” Relationship between elements seems to be a recurring theme for my work and it’s something I’m constantly aware of now.

I still think if the story of the piece and some explanation as to why we made the decisions we did were included as part of the submission, this would go some way to explaining ourselves. I find it very frustrating to have questions asked in the assessments with no mechanism to answer the questions. Still, the Registry is still in its early days and they are making changes as more candidates go through the process. And they are very open to feedback so I’ve voiced my opinions and I hope they are understood even if they aren’t accepted. 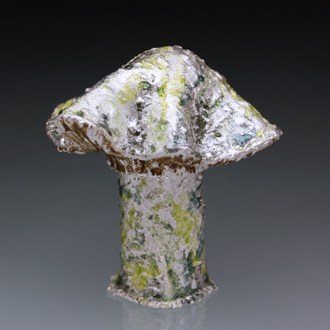 My second attempt fared slightly better though not much!

I’ve always loved mushrooms – both to eat and as forms. I decided to experiment with the mushroom form for my next friction lid box. I made a wide tube for the stalk and then put together the lid. The clay disc was rolled out and textured with wallpaper. This was dried over a candle light bulb with some bits of polymer clay stuck up the sides to give a wavy effect to the edges. I then made another tube to fit over the stalk and stuck this into the dried lid. I connected the edges of the lid to the tube with wet clay to form the base of the lid. It worked really well. The texture is made with thick slip and a cocktail stick to give a random, organic surface.

Once fired, I then added enamel randomly in earthy colours. This gave the box some interest and a bit of colour which I thought worked well. The box is 4cms high and 4cms wide at the widest part of the lid.

Here are the scores:-

​I was disappointed with 7.5 out of 10. Here are the comments, “I applaud the use of enamel – it makes the piece more complicated and interesting, combining texture with color. I also like attention to details, for instance in the edge of the cylinder where it touches the table….nice granular edge. I also appreciate the clean lines and finish of the bezel rim where the lid meets the cylindrical box.” So why did I lose marks for Design and Craftsmanship? This is something I find very frustrating. It’s lovely to hear what was right with the piece but I learn much more when I’m told what didn’t work. When they knock off marks, I really wish they’d say exactly why! This is one of the projects I want to revisit when I’ve completed the Registry.

​A6 Box with Friction Lid​

A small box made entirely of metal clay with a friction lid. The size and depth are up to the maker, but should fit comfortably into the palm of the hand. The box can be plain or embellished, it can contain gems or not.