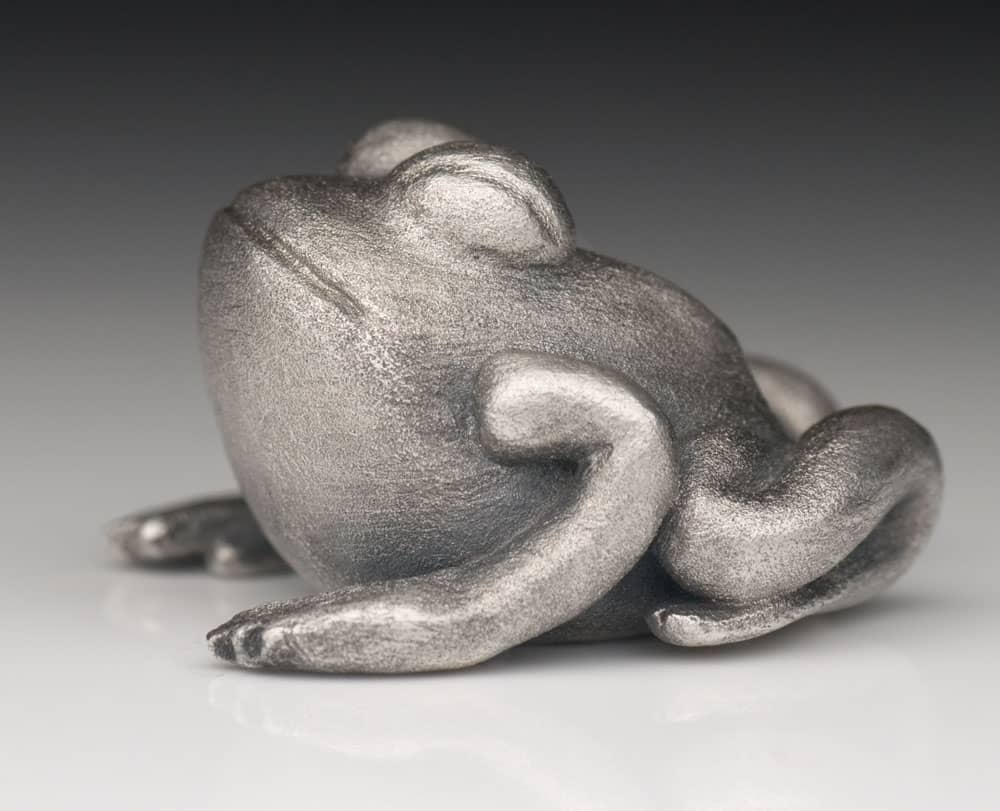 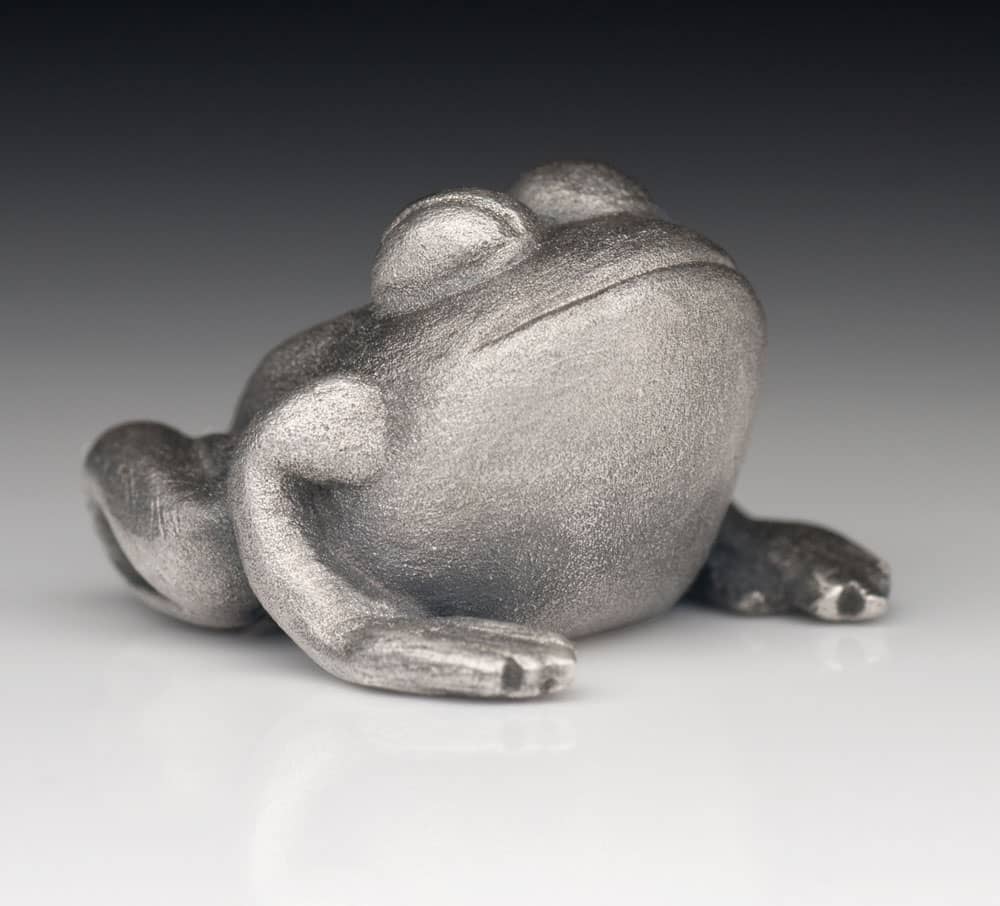 This little frog was my first project. It’s still one of my favourites.

The project asks for you to research a specific culture to learn about religious or talismanic figures. I’ve always been fascinated by the ancient Egyptians so it was pretty natural to look that way for inspiration. There’s certainly plenty of options in the Egyptian pantheon of gods. I chose the frog because I wanted to do something small – I normally work quite big. I found lots of images of frogs, not just the Egyptian gods but frogs in general. Then I made one in polymer clay to try and see how it would fit together.

My first attempt was not really very anatomically correct so the second one I made took much longer and really required quite a bit of testing. It was made in PMC Standard which has the highest shrinkage. The finished frog is under 2cms long. If you look closely, you can see she has human hands rather than webbed feet. This alludes to the goddess Heket appearing in the form of a frog. Heket is the goddess of childbirth and fertility.

The body was the first bit I made, followed by the back legs and then the front legs. The hands were made separately and added. The eyes were the last elements to be added. Once fired, I used Liver of Sulfur to patina the piece and then polished it. I got full marks for this piece.

​It was so gratifying to have something pass with full marks in my first submission. The comments were pretty good too, “Congratulations on an excellent job. I enjoyed the research and will never look at a frog in quite the same way. The totem is charming but still retains a power that elevates it above the sort of animal form we could find in a gift shop” And a final comment, “I especially like his toes.”

Below are some of the images I found to help me research the subject. 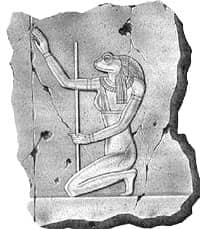 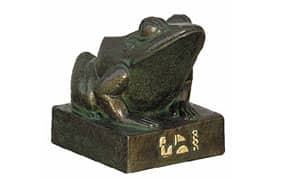 My article is reproduced here.

Heket (also known as Heqet, Heqt, Heka, Hekit, Heqit) was one of a number of goddesses associated with fertility and childbirth in the Egyptian pantheon. In association with Khnum and Osiris she stood for the creation and regeneration of life. As the daughter of the sun-god Re she is called ‘Eye of Re’ (or Ra) and ‘Mother of the gods’.

Moira Timms, in an Atlantis Rising article on Denderah’s images, says that the etymology of Heqet’s name reveals her function: Heh is from a word having to do with eons of time, and the glyph for qet is the pointed knife, two of which this goddess holds. One is for cutting the umbilical cord and the other, according to Timms, is a weapon of defence. But the knives are in the form of the hieroglyph, qet, which has been translated as qualities, dispositions, abilities, virtues. She is a “uniter of attributes.”

She originally appears in the pyramid texts where she helps the pharaoh ascend into the sky. She is also connected with the Osiris myth in the “Funeral of Osiris” at Denderah. Osiris is in mummied form, lying upon his bier; over his feet and his body hover the hawks. At the head kneels Hathor, and at the foot is a frog symbol of the goddess Heket, beneath the bier are an ibis-headed god holding the Utchat, two serpents, and the god Bes. As such, she was not only a goddess of birth, but of rebirth, because of her life-giving powers.

Heket was summoned to hasten the final stages of labour. There is also some evidence to suggest that midwives were referred to as the ‘servants of Heket’.She appeared sometimes in the shape of a frog, sometimes in human shape with a frog’s head, or more rarely as a frog on the end of a phallus to explicitly indicate her association with fertility.

Though the symbol of a frog is found in other mythologies, in Egyptian mythology the frog played a most significant role. To the Egyptians, the frog was a symbol of life and fertility, since millions of them were born after the annual inundation of the Nile, which brought fertility to the otherwise barren lands. As Pliny recorded, the Egyptians believed that after six months the frogs were dissolved into mud and spontaneously recreated in the following spring.

Heket was thought to be the wife of Khnum, the god who created men on his potter’s wheel, and she gave the newly created being the breath of life before the child was placed to grow in the mother’s womb.

Amulets and scarabs worn by women to protect them during childbirth often bear the image of the Frog Goddess. Frog amulets were very popular both in semiprecious stone and in faience, and were worn by women hoping for an easy delivery. Both sexes wore the frog in expectation of a successful rebirth in the afterlife. The life-giving powers of Heket enabled her to be adopted as a benign deity fit to accompany Osiris, in whose temble at Abidos she receives wine from King Seti I and is labelled “Mistress of the Two Lands”.

During the Middle Kingdom ritual ivory knives and clappers (a type of percussional musical instrument) bore her name or image as protection for inside the home. Frogs were also depicted on jewellery and other ornaments in ancient Egypt and other civilizations. Frog-laden knives placed atop the bellies of pregnant women and newborn babies were believed to bring protection to the youngsters. Frogs in general were so important to the early Egyptians that they were often embalmed upon death.

Pursue library or on-line research into a specific culture to learn about religious or talismanic figures. Using primarily metal clay, make a figure that fits into this tradition. Examples would include a Neolithic earth goddess, a Mayan god, and Egyptian tomb figure, a Day of the Dead skeletal figure, and so on. Write an article of between 500 and 1000 words about the figures and their importance in the culture.

Click here to go to the next Level 1 Project